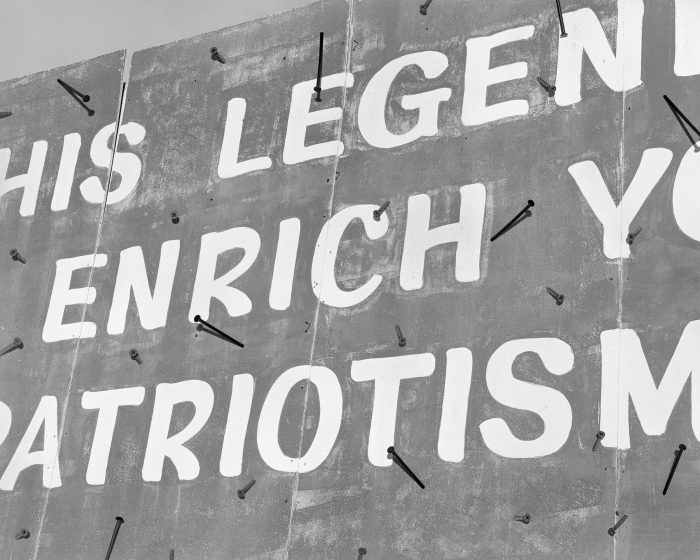 From Angle of Draw

Lens-based artist Shawn Bush (he/him/his) grew up in Detroit, MI, a city whose civic history and geographic location have profoundly influenced the way he thinks about physical space within American sociopolitical and socioeconomic landscapes. His photographs and collages are responsive to over-built systems, failing icons, and collapsing mythologies. Bush earned an MFA from Rhode Island School of Design and a BA from Columbia College Chicago.

He is a 2021 recipient of the Aperture CreatorLabs Photo Fund, a 2021 Wyoming Arts Council Fellow, and a 2017 Lenscratch Student Prize winner. His debut monograph A Golden State won the handmade category at the 2016 Lucie Photobook Prize (NYC) and is included in several noted collections, including the Griffin Museum of Photography (Boston, MA), Benaki Museum (Athens, Greece), and Museum of Contemporary Photography (Chicago, IL). A Golden State was published by Skylark Editions (Chicago, IL) in 2018. Bush’s work has been shown in various arts & culture publications, including Wallpaper Magazine* (London, UK), FotoFilmic’s JRNL (Vancouver, BC), and Vogue (NYC). His second monograph, Between Gods and Animals, was published by VOID (Athens, Greece) in Fall 2021. Bush is the founder of Dais Books and Assistant Professor of Photography at Casper College.

“For the last six years, my practice has focused on the interaction of gender, whiteness, and Western systems of power. After moving to a red state under a president whose entire ethos and identity reflect the fragility of losing position and authority, the deteriorating empire of white maleness has never been more present in my life. The physical, social and economic landscapes that surround me are entirely dependent on antiquated ideologies that systemize environmental degradation known to contribute to global warming, in order to delay the inevitable collapse of their necessity. The work is a mix of straight photographs & collages created from a collection of purchased negatives & prints alongside my own images, which are produced in-camera using multiple exposures as well as in the traditional darkroom alongside my own. The acquired archives come from a White male prospector searching for gold during the early 1900s and a propaganda photographer active during the 1960s and early 1970s. The visual language and lighting employed in my own images reflect those used in the propaganda archive as a way to connect two pivotal times of liberation and fear within the white male community to social unrest.” – Shawn Bush