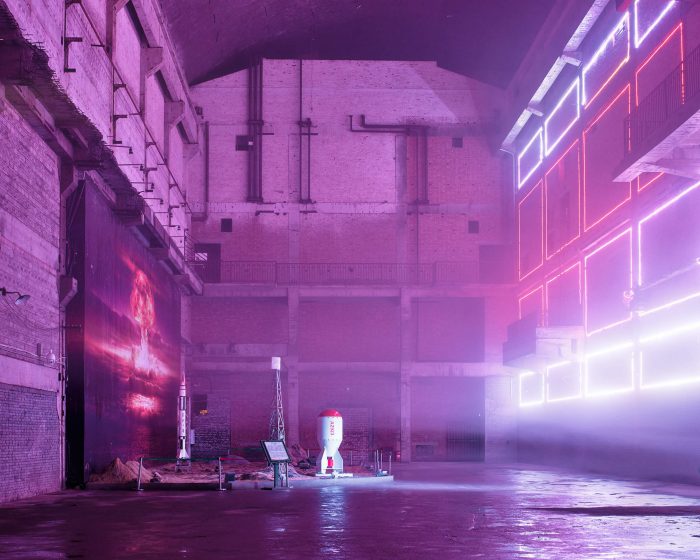 From In Search of Nirvana

816 Nuclear Military Plant, 2018
61 x 76.2 cm
Edition of 5 + 2AP
Giclée prints on Hahnemühle Pearl
Accompanied by a certificate of authenticity from the artist
£800

“What made me pick Jimmy’s work was its ability to stop me dead in my tracks… The sense of a masqueraded utopia, slowly collapsing upon itself and leaving behind only a mirage of what it could have been.” – Keith Cullen, Director, Setanta Books

“In Search of Nirvana is a photographic field research of contemporary western China. These photographs were made in 12 provincial-level regions in western China from 2013 to 2018. Having spent my childhood in Hong Kong, my idea of China was vague. China was too distant from me, not only physically but significantly also in its ideology. I realized there was part of me missing. Therefore, I consciously travelled to western China to search for the interconnection between my racial identity and Chineseness. This project looks into the absurdity of contemporary Chinese society and depicts the daily life in China that is paradoxically existed in two senses – harmonious and manipulated. In recent decades, China has passed through an era of abnormally distorted ideological struggles in a highly compressed manner. It has rapidly moved towards urbanization and capitalization; the gap between urban and rural areas is severe, and the highly centralized monitoring system becomes extremely popular across Chinese cities. In this atmosphere, this project derives the symbolic meaning of the image. The continuous roads that run through the barren land, plastic flowers in freezing winter, the concept of patriotism, the nuclear-weapon project, and the large-scale abandoned stadium are all flashpoints of image tension. The imagery is the mixture of Chinese ambition and traditional Chineseness. The paradoxical immersion represents the Chinese (national) identity, which is also an eternal cultural issue, especially for today’s Hongkongers. Nirvana is a Buddhism term, which has a close meaning to disengagement. Buddhists believe that they can find Nirvana in the west. Once people arrive at the Nirvana, he or she can reach endless happiness and suffer no pain. I started the journey with the intention to search for Nirvana and the answer to what I am. However, I failed both in the end.” – Jimmy Lee, 2021

Jimmy Lee 李展翹 (b.1993) is a University part-time lecturer, doctoral researcher, visual art practitioner and documentary photographer. He was born and grew up in Hong Kong. Lee’s practice comes across documentary and experimental narrative. He started his photographic practice in a Hong Kong-based newspaper as a photographer during his time in higher education, after that he pursued the MFA in the UK. He is now conducting practice-based research on Hongkonger identity at University of the Arts London collaborated with University for the Creative Arts, Farnham. His project Beyond the current practice was published as a photozine by Brownie publishing Ltd. From 2015, Lee started to work on a personal documentary project concerned with the identity issue faced by people from Hong Kong. There is no clear definition of what Hongkonger are and they have grown up living with cultural references embedded in their society from both China and the United Kingdom. Over the past couple years, Lee has been researching the ideology of the Hong Kong people, colonial history, collective memory, geo-political relations, trauma, and narrative. Lee also interested in the social and political issues of contemporary life around the globe, he has been focusing on Western China, England and Hong Kong. He sets out to discover the possibility of documentary photography, to expand its horizons and to work with projects that convey his personal concerns.