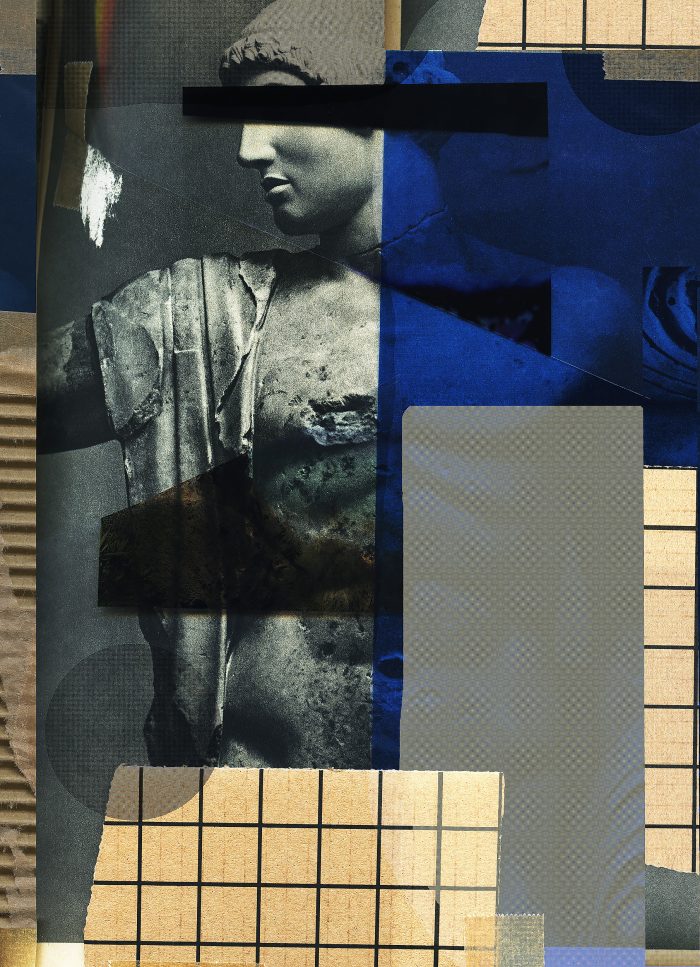 50 x 33 cm
Gicleé print
Edition of 5 +2AP
From The Archive of Gesture, 2021
Accompanied by a signed certificate of authenticity from the artist
From £1,100

The Archive of Gesture (2020) is an ongoing series comprised of found images, still life photography and digital interventions. The works use collage and sculpture to look at the role of hands in communication.

Unspoken forms of communication such as gesture play a large role in our everyday lives, gesture can be manipulative, and information delivered in this way can be miscommunicated and misleading. Politicians are extremely careful with their gesticulating as to not infer negative connotations; religion uses gestures to communicate to deities, cultural gestures used incorrectly in foreign countries may cause offence. Gesture can be misused and misinterpreted. But what happens in the absence of gesture?

Using Greek statues as a reference, the inspiration for this work is drawn from the absence of body language. In many instances the arms or hands of the statues are missing, broken off or amputated over time. The famous statue Venus de Milo is said to have held an apple in one of her missing hands.

Following on from the research thread started in previous works such as Other Ways of Knowing and The Path of an Honest Man, this new series expands on this interest in the construction of meaning and the failings of communication.

This work when physically installed, is shown with the addition of a series of hand castings mounted onto concrete plinths. The castings act as a balance to the missing gestures shown in the images of the Greek statues.

In 2014, Alexandra Lethbridge’s book The Meteorite Hunter was shortlisted for the Paris Photo Aperture Foundation First Photo Book Award and is also included as part of the MoMA’s book collection. Most recently, she was chosen as the winner for the Spotlight Award 2021 as part of Belfast Photo Festival.

Her work has been exhibited world-wide and has won many awards. Publications to feature her work have included 1000 Words Magazine, GUP, Yet Magazine, Foam Talent, Der Grief, Self Publish Be Happy, Wired Magazine and The Telegraph online. Her work is held in the ING collection in Amsterdam. Alongside her practice, Alexandra is a Lecturer in Photography at Falmouth University, Southampton Solent University, and University of Portsmouth and is a visiting lecturer at many other institutions.