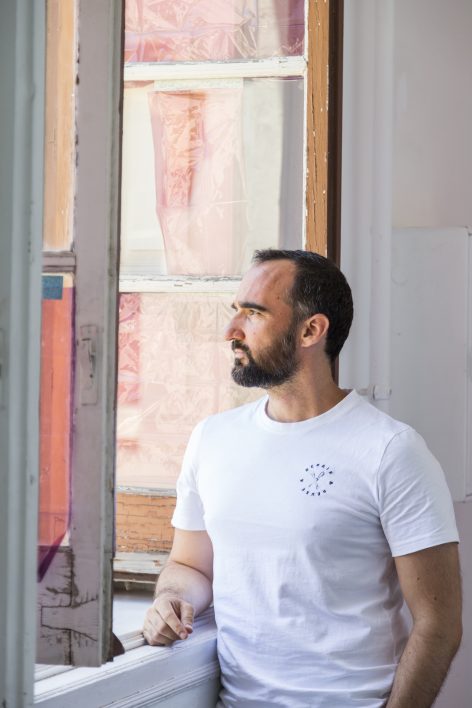 Javier Hirschfeld Moreno [b.1979, Málaga] is a Spanish artist and curator currently living in London. Moreno is interested in the role and responsibility of photography in the representation of the self and also collective identities.

Javier Hirschfeld Moreno’s ongoing Profile series explores the artist’s interest in art history and portraiture as well as his fascination with self-representation. By using Cartes de Visite, which were hugely popular in the 1860’s, and a collection of screenshots amassed from contemporary dating platforms like Tinder and Grindr, Javier examines themes of identity and visibility, documentation and archive, as well as emotional and surveillance capitalism.

Javier argues through his extensive research into these subjects that Cartes de Visite were the first example of socialisation mediated by photography, and the beginning of the ‘contemporary culture of ego’. Perhaps even an early form of social media themselves.
_

_
So by cutting into his collection of original nineteenth century cards (Carte de Visite) and removing the figures from them, Javier creates a window. Then by using a collection of screenshots he has captured from dating apps like Tinder & Grindr the artist spends time considering the perfect ‘match’ between then and now by carefully arranging the print behind the window. Generally choosing the images that aren’t overtly sexy, so revealing the nude body for example, but instead selecting the masks that some of us choose to wear on these apps and choose to present to the world. In other words images from ‘discreet’ users of these apps.

Javier is fascinated by the associations & deductions the audience is then forced to make through this sophisticated language of imagery embedded in our collective subconscious.

This simple and elegant idea opens up a portal through the history of photography and in the same moment creates a dialogue between society then and society now. From the beginning of modernity with all it’s aspirations and anxieties, to current social preoccupations around our images.

“I played with printed dating-app profiles and intervened on the cartes of young males. As a result, the landscape replaces the portrait and the digital invades the old photograph, illustrating at once the offline-to-online transition and one of its consequences, a certain loss of queer visibility. Apps have supplanted gay bars and cruising spaces, and contributed the slow death of the gay village, queered places like Soho in London, historical spaces of leisure, but also of solidarity and political visibility. The hollow silhouettes of these males replaced by empty landscapes make conspicuous this process of gradual invisibility.

Ironically, these bucolic images, mostly accessed alone at home, resemble cruising spaces such as forests, beaches or leafy pathways – historical spaces of queer freedom away from societal surveillance. Profile shows how this transition from offline to online dating (/hook up), neither contributes to queer visibility nor has never been surveilled so intensely.” – Javier Hirschfeld Moreno, 2022

Javier Hirschfeld is a Spanish artist and curator. He currently lives and works in London.