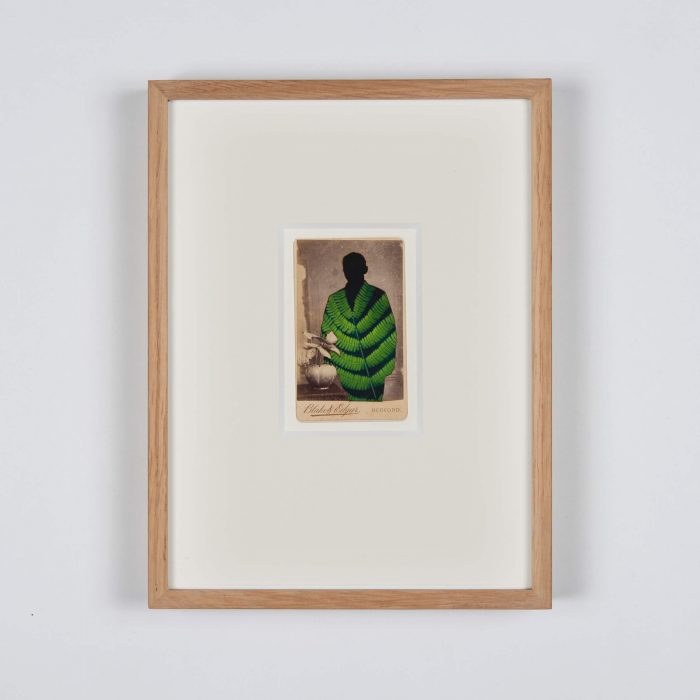 From the series Profile by Javier Hirschfeld Moreno
Unique

Accompanied by a signed certificate of authenticity

Javier Hirschfeld Moreno is a Spanish artist and curator. He currently lives and works in London. His photographic projects include Profile, The Sheltering Pixel, Miguel de Moreno and Once Ideal Senegal.

Javier Hirschfeld Moreno is interested in the role and responsibility of photography in the representation of the self and collective identities. He studied History of Art at Birkbeck and, in parallel, developed an interest in portrait photography. The diversity of the people he encountered and photographed in London, contrasted with the western-centric view of art history, which mainly focused on white male artists.

Hirschfeld is influenced by Masters of Western art, including Caravaggio or Zurbaran, Masters of West African studio photography like Seydou Keita, Malick Sidibe or Samuel Fosso, as well as contemporary artists like Omar Victor Diop, David Wojnarowicz or Joan Fontcuberta.

“In Profile my interest in art history and portraiture meets my fascination (/obsession) with self-representation on dating apps. The project explores topics around queer identity and visibility, documentation and archive, as well as emotional and surveillance capitalism. It was born after the research for my BA dissertation ‘From Carte de Visite to Tinder: the burden of constant self- representation’ at Birkbeck University, and also after my own observations, experiences and reflections on representations of fellow ‘cruisers’ on dating apps such as Grindr or Tinder.

During my research I examined hundreds of dating-app profiles looking for conclusions on contemporary self-representation strategies, aspirations and anxieties, which I then compared to those from 1860s Cartes de visite.

These small photographs (roughly the size of the screen of my iPhone 6) were the first instance of socialisation, and even flirtation, mediated by photographs. Patented by Parisian photographer André Disderi in 1854, Cartes became a very successful enterprise, particularly in the UK and France. The ‘Cardomania’ craze created the need to not only have a portrait of oneself, but also multiple copies of them to exchange amongst family, friends and acquaintances. They inaugurated what Rafael Doctor calls the ‘contemporary culture of ego’, and were also the first instance in which the faces of regular men and women became commodities – they started being used as advertisements of the photographer’s studio.

150 years later, dating-app photographs, our most flattering portraits, are today’s cartes de visite to online love. Of all the dating-app profiles I examined, I became particularly interested and intrigued about those using landscapes images as their profile that some ‘discrete users’ had in the place of the (expected) portrait on queer dating apps. On one hand it makes for the uncanny experience of being chatted up by a waterfall or a palm tree whilst lying on your sofa, but I also feel that this need for ‘discretion’ (/closeting) is also a stark reminder of the mask that queer people have been forced to wear for centuries.

I played with printed dating-app profiles and intervened cartes of young males. As a result, the landscape replaces the portrait and the digital invades the old photograph, illustrating at once the offline-to-online transition and one of its consequences, a certain loss of queer visibility. Apps have supplanted gay bars and cruising spaces, and contributed the slow death of the gay village, queered places like Soho in London, historical spaces of leisure, but also of solidarity and political visibility. The hollow silhouettes of these males replaced by empty landscapes make conspicuous this process of gradual invisibility.

Ironically, these bucolic images, mostly accessed alone at home, resemble cruising spaces such as forests, beaches or leafy pathways – historical spaces of queer freedom away from societal surveillance. Profile shows how this transition from offline to online dating (/hook up), neither contributes to queer visibility nor has never been surveyed so intensely. Interestingly, I find, in the 1860s, when Cardomania was at its height, the British police started using photography as evidence, and also as a tool to control and classify subjects– especially those ‘passive’ subjects such as colonial subjects, criminals or people in mental health institutions – including homosexuals. Since then, through a process of (created) necessities and consent our faces have been ‘given’ to public institutions or private companies leading to today’s seemingly unavoidable ‘surveillance capitalism’.

These landscapes-as-profile, strike me as a poetic, albeit futile, attempt to fight both ‘surveillance capitalism’ and what John Tagg referred to as ‘the burden of representation’. Even if that struggle is not successful, at the very least, these images of nature offered a refreshing break from normative portraits and repetitive torsos imposed by the logic of ‘emotional capitalism’ and its highly competitive online market (following Eva Ilouz).

Zygmunt Bauman’s notion of ‘liquid modernity’ and its increasingly precarious, ever replaceable relationships resonates here, and it is symbolically illustrated by the seascapes and waterfalls replacing the old cartes which initiated this ‘liquefaction’ of socialisation.” – Javier Hirschfeld Moreno, 2021

For availability or to see more from this series contact:
tom@opendoors.gallery